Welcome all for Email Security!

On July 20th 2020 our esteemed development team released version 4.8.0 of Libraesva ESG to the world stage, after a beta test period, we are now happy with the performance and stability of the version, and are happy to release it.

We thought it was best here at Libraesva to, for the first time, run through the release notes of this version and talk a little bit about why the new features were added, what they do briefly, their uses, and also some of the improvements.

All of our Libraesva Private Cloud customers will have their machine’s upgraded automatically at a time where the technical team see fits, however if you want to upgrade earlier, or are an on-premise user, visit this link here: https://docs.libraesva.com/download/libraesva-esg-4-7-to-4-8-upgrade/

All features and improvements are included as standard with all versions of Libraesva ESG, unless stated otherwise. 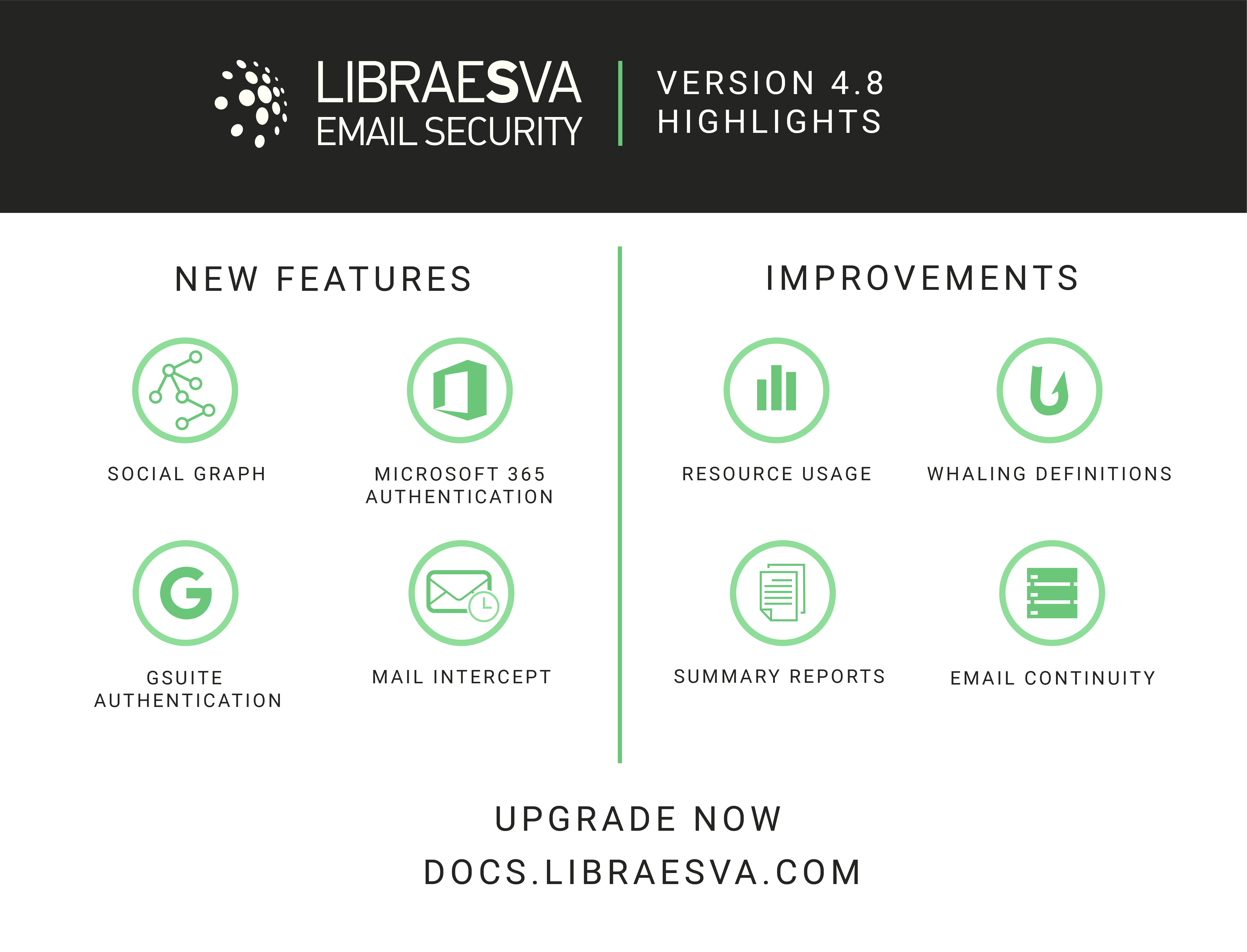 The Mail Intercept feature came about from user’s sending email by accident to the wrong person, or misspelling new email addresses, the system actively monitors your relationship using the Adaptive Trust Engine, and who you’ve sent email to before, the system will spot the inconsistencies and prompt user’s with a “First Time Recipient” style notification, allowing users to recall the message, as can be seen below.

Included with the SMTP Policy Quota option of Libraesva ESG

The social graph came out of the update and upgrade of the Adaptive Trust Engine, our new and improved relationship monitoring system. The Social Graph uses the information caught from inbound and outbound monitoring of email to understand the email users, who they are and who they usually talk to, in the example below, you can see the user “[email protected]” and the graph which shows us quickly, and easily the most common communicated recipients and senders of email. In this case you can see the domains, then for a closer look, simply click on the domain and see the individual users within the organisation that are communicating to our user the most. This feature is available now, for free, for all of our production v4.8 users. You do however require inbound and outbound email to be processed by Libraesva ESG.

This is for non-MSP/ISP licenses only.

Microsoft/Office 365 Authentication has been something on the Libraesva road-map ever since it was implemented into the Email Archiver back in 2019, since then we have released a full integration with Office 365, including API access into the Users and Valid Recipients data, making rolling out the Libraesva ESG into the cloud, much easier. So now Libraesva are able to offer the full and complete package of Microsoft 365 Integration, with our new OAuth2-based authentication. This opens up Libraesva to being able to work with Azure AD’s multifactor authentication, and custom login screens.

Below is an example video of the user pparker, logging into the ESG with their email address, then automatically being detected as an O365 user, and being forced to authenticate with the Azure AD system.

With more and more of Libraesva’s customers adopting GSuite, or Google Apps as it may be known, Libraesva often found that we had been neglecting the GSuite space, this inclusion in 4.8 of the Gsuite Authentication expands our direct integration from Microsoft 365 to GSuite too, We can now import User and Valid Recipient data into the platform using the google APIs, we can also now use OAuth-2 based authentication similar to the above point, to detect a user is a GSuite account, and forward them off to Google for authentication, you can see a video example below of that process.

Allows the ESG machine to accept email on port 465 and 587 automatically, as before it was just port 25 (SMTP), this came about from needing to add more ways to get email into the appliance, some services and systems can already be populating the port 25 space, so adding more available ports was seen as a key benefit that Libraesva needed to add.

SMTP Auth Relay allows configuration of credentials for authenticated SMTP sessions, which will be relayed by Libraesva ESG. Libraesva ESG allows relay from any SMTP authenticated client, this addition now allows the authentication to be backed up and handled by an LDAP Service.

Allows Admins to specify the public URL of the ESG machine within the Logo & Messages section using a variable, within the Libraesva Console. You might want to send notifications out to your users which show them the public url of the appliance, in order to assist user adoption and get users accessing the web portal.

URLs that are present in email, will now be checked against the Libraesva URL Blacklist, populated by data from many sources, including our proprietary URLSand Sandboxing service, which earlier in 2019 gained the attention of Palo Alto, you can read more about that here: https://www.libraesva.com/libraesva-and-palo-alto-networks/

When messages are released from Libraesva ESG, they can create an email in the dashboard and the reports screen, usually marked with the trigger (OFF) as can be seen here

So when you are in this message, looking to understand why the message has been released, who did it and possible more technical information about that message, there is now a link in the technical details section, seen below.

This will link you directly to the original message before it was released, so you can fully analyse the message and its contents, making administrative life a little easier.